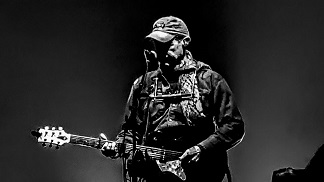 The joy of being in his company stems from his faultless way with words– he’s a true wordsmith, hand picking them in songs that vividly reflect all kind of moods to deliver intriguing story lines.

His song sources are mind boggling: a stressed out mum driving the interstate with two babies in the back – on the track Thursday; the homeless and the hopeless with their signs at road intersections – on Signs; men lost in a desert who are barely newsworthy – Migrants from Say Grace that came out seven years ago.

Then, in a wonderful change of tone and atmosphere, he sings of the gently, sexy pleasure of a woman slowly undressing poolside while he pretends to read a Mark Twain book – Sweetly Undone, which you’ll find on “Pretty World” from 2007.

These songs are remarkable and evocative concoctions, and they tumble out as Sam takes us through the night, accompanied by the marvellous, Croatian pianist/accordionist, Radoslav Lorkovic, whose craftsmanship is perfect for these compositions.

Sam’s current tour is a masterful celebration of the 15th anniversary of 2014 debut album, “Mercy” but he opens with Same Kinda Blue from 2017 release, “Land Of Doubt.”

“Way down in a tunnel / where the fallen angels dwell / there is a quiet young man / crawling into hell,” sings Sam capturing war’s brutality and futility, graphically.

Sam, of course, has experienced violence close up as he survived a terrorist bomb blast on a train to Machu Picchu in Peru in 1986. Lots of surgery plus mental anguish ensued but he climbed out of a dark hole of rage, he told us, so the gorgeous Broken Fingers from “Pretty World” is back on the setlist – you could have heard a pin drop in George Square more than a mile away, never mind the venue, during it.

He reveals his love of the rain in Glasgow, mentions global warming and then delivers Snow, the final track on the 2009 album “Cotton.” It reveals snatched conversations on the streets with strangers, when there’s an early morning chill and all is pristine, all is calm.

From “Mercy” he brings us its glorious and moving opener, Waves – for me this is one of the most touching, heartbreaking songs I’ve ever heard, one that always brings a lump to my throat, and it happens again.

A widower remembers his wife of 50 years and his longing to be with her again is captured purely, poignantly by Sam as he sings: “He walks down to the ocean / Bends to touch the water, kneels to pray / He writes her name in the sand / Waves wash it away.”

On the wonderfully jaunty Orphan, Sam sparkles as he delivers the affecting lyrics which include: “So she ended up in a home for girls / A straight hair kid in a house full of curls / A straight haired kid always hanging around.” Beat that for a description.

Not convinced, then how is this?

“There was a dry goods store / A flower shop / A barber with no nose / One alcoholic cop” opens the song, Change. It also includes the lines “Things change / they change a lot” but they don’t as far as the brilliance, warmth and passion Sam Baker brings to us through his music is concerned. A lengthy, heartfelt standing ovation was the least we could offer him in return.