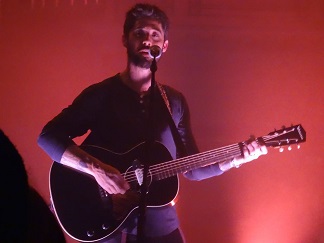 He's a good storyteller is Ryan Bingham - in song and between songs. And, of course, his back story is interesting, too.

But getting a guitar from his mother when he was 16 would prove pivotal. He learned to play - with occasional help from one of his father's hard-drinking, card-playing chums - and here in Saint Luke's he confirmed he is an exceptionally fine guitarist, indeed, and sings with a gleeful country raggedness and swagger or a refined gentleness.

There is a disarming confidence as he chats and delivers a crowd-pleasing set list including, of course, his Oscar and Grammy award-winning, The Weary Kind, the marvellous and gripping theme song he wrote for the film "Crazy Heart" back in 2010, the year he was honoured as the Americana Music Association's Artist of the Year. It is a real show stopper as he hits a gravel tone to sing: "Whiskey has been a thorn in your side / And it doesn't forget / The highway that calls for your heart inside / And this ain't no place for the weary kind / And this ain't no place to lose your mind."

His gripping voice seems as it if it should belong to someone older and more grizzled (Kris Kristofferson, maybe?) but it is a joy on hushed tracks, or on the beefy and rough diamond drive of Jingle And Go, from current strident release, "American Love Song," very much a look back on his youth and a searing, personal examination of the political situation in America today.

He throws in decisive Terry Allen and Paul Brady covers flawlessly before flowing into The Southside Of Heaven, the opening track of his debut album "Mescalita" from 2007. The crowd sings along, enthralled and enthusiastic, as we have been all the way through a set of sheer, unadulterated quality.