It was a day that felt like a very long day for VARious reasons (there's a pun in there somewhere), so it was hugely uplifting to sit in a comfy chair surrounded by books watching two folk artists perform at the top of their game. It was fitting that Minnie should have chosen Transfer Deadline Day to deliver a football themed set to launch her new album "You're Not Singing Anymore (Volume 1)", due for release this summer.

It would be wrong not to mention here the effort that the Big Comfy Bookshop put in to make this such a memorable evening: perfect lighting, and a backdrop of carefully placed football themed books that created an ambience for the truly appreciative audience, mixing fans of the real art of football from Blackpool, Southend United, Aston Villa, Coventry City, Watford and other places too!

The scene thus set, Robert Lane kicked off the evening with a warmth that only an accomplished performer can achieve. Lyrically up there with some of the best young artists this country has to offer and a very fine guitarist, his performance swung from humour to family, 12-bar blues to politics, and from scientific innovation to a song considered "too dark for radio".

For me, the 'too dark' song "Teardrop Tattoo" was probably his best of the evening. It was inspired by a senseless crime that happened just six miles away from where I sit writing this review. The impulsive, cold blooded killing of Lancaster University student Anuj Bidve in Salford on Boxing Day 2011 sent shock waves through the community that reverberated back to his home in India. Robert's song carries with it the shock of that night and has real power.

This was a well-balanced set, delivering songs mainly from his latest album "Only a Flight Away" (2018). Other highlights included the family themed songs "Feels like "5000 Miles" which is about dealing with the breakup of a relationship ('I miss my wife and my daughter / I miss the way they don't do what I say. I miss my wife and my daughter / How long's it been since I was seen?'), and "Wilful Independent" which considers the awkward months and years that parents experience as their teenage child starts to find their own path in life (Wilful independent. You failed as my descendent).

"Bill Frost's Flying Machine" is about an inventor who reputedly built a powered flying machine ten years before the Wright Brothers, and contains a line that gave the album its title. It apparently did fly, but only into a tree! The song is written from the perspective of the crashed machine. The final song of the set "Who Do You Think You Are Talking For" sees Robert Lane at his lyrical best with his most political song of the evening, on what will no doubt become known by some as Brexit Day. Everyone has a political opinion but lately it does feel like only those who shout loudest are being heard. The song also produced a heavy metal moment, when Robert caught his guitar strings against his microphone stand, Ted Nugent style! Accomplished performers always recover seamlessly from those unexpected highlights that really make live music, and leave us with special memories. This was a really good performance. 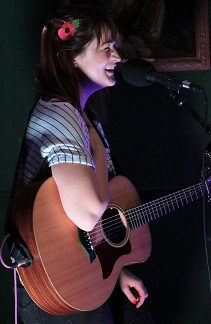 Minnie Birch's new album "You're Not Singing Anymore (Volume 1)" is due for release in the summer, but this was the official launch night because The Big Comfy Bookshop is one of her favourite places to play. By the time of its release it will have taken over a year to put the album together, as she sought to include as many football stories as possible both on the recording and again in live performance, and also a crowd scene to organise at Berkhamsted FC along the way.

This has been a real labour of love, and Minnie's passion for the beautiful game shone through on the night, during which she revealed her reasons for choosing football as a subject matter in the first place. 'F' for football is all I will add. I agree that football songs represent part of today's folk music legacy, and her selection includes football versions of folk songs of old. And so, resplendent in full football kit, Minnie's beautifully delivered set opened with "Accident of Birth", a Steve Donoghue song which she backs with piano, and which looks at a fan's relationship with their club (the football team that I support is just an accident of birth).

I was fortunate enough to make a small contribution to Minnie's recording of the single "God's Footballer", a wonderful interpretation of Billy Bragg's 1991 song about Peter Knowles, brother of 'Nice One Cyril', who decided early in his promising career with Wolverhampton Wanderers to become a Jehovah's Witness. Well, football is a kind of religion. Her engaging delivery was slick from tablet to guitar as stories from Aly Bart, Robert Rhead, and me were seamlessly interspersed with a sensitive vocal delivery and finger picked acoustic guitar. It was especially nice to be able to follow this live version with an account of Blackpool 10-0 Lanerossi Vicenza from 1972. I was there. Look it up!

"My Bonnie Lies Over the Ocean" is one of a number of either older or traditional songs whose lyrics have been appropriated for the hymns and anthems of the football terraces. The set continued with a cover of Megson's football themed "The Long Shot", which could be taken as a metaphor for life or simply as a football story (Take a long shot / if that's all there is / Put it in a very safe place / Where your doubt can't get to it). And football fans of almost any persuasion will recognise "Blaydon Races" as Newcastle United's anthem. It's been adapted by most clubs to celebrate their 'aces', so it was no surprise that the Big Comfy audience gave the chorus their best shot:

"Oh me lads, you should've seen us gannin'
Passing the folks along the road
just as they were stannin'
Aal the lads and lasses there
aal wi' smilin' faces
Gannin along the Scotswood Road
To see the Blaydon Races"

The Newcastle anthem was followed with "Cash Out", an original song for the album. It's a song about being let down in love, and Minnie told a story of how she tried to rescue a relationship using a technique she found online to do an activity for each letter of the alphabet. 'F' was thus for football, so she bought two tickets to a match but found herself going alone.

Irvine King's "Show Me The Way To Go Home" closed her set, complete with more football stories synchronised from her tablet. The song includes reference to a number of football grounds from Elland Road to Plough Lane, and in a spirit of inclusion, it was agreed that the chorus should be neutral that any chanting should be aimed at VAR!

With the recent passing of the genius Python Terry Jones, Robert Lane and `Minnie Birch chose to end the evening together with a rendition of Monty Python's "Always Look on the Bright Side of Life". And so it was that in a small literary space on a politically divisive evening elsewhere, unity among football fans took centre stage in an atmosphere of fun and laughter.