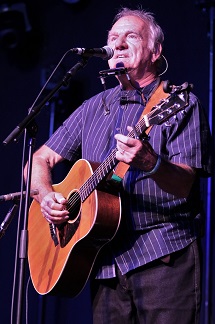 Tom, Ralph McTell's son wanted to give his dad a special present for his 75th birthday. What should it be? Ah yes, a little get together with some of his musician friends.

That "little get together" turned out to be a magnificent , full-blown concert at the prestigious Royal Festival Hall on the Southbank and those musician friends turned out to be some of British Isles' best-known and highly regarded players and singers. Oh, and just for good measure we had a full string section [ The Southbank Sinfonia] and choir [ The Purcell Singers].

The house band for this "little get together" turned out to consist of Fairport Convention's Dave Pegg and Gerry Conway, Neill MacColl [ of The Bible] , Chris Parkinson [of The House Band] and Musical Director Graham Preskett [ of Gryphon and many film scores]. Producer/ Arranger/ Mandolinist for the show was Frank Gallagher who worked with Ralph on his excellent new album "Hill of Beans".

Representing her parents Mary Hopkin and Tony Visconti [ both of whom have worked with Ralph over the years] was singer Jess Morgan . During the evening guest appearances were made by the legendary double bassist Danny Thompson and the equally legendary John Sheahan , the fiddle player and only surviving original member of The Dubliners. Other notable guests were the wonderful Barbara Dickson , the television correspondent and author Fergal Keane and, last but not least, the actor Adrian Dunbar [ Superintendent Ted Hastings of "Line Of Duty" fame].

Naturally enough, the concert covered half a century of Ralph's career from 1969 to 2019 and featured numerous different permutations of the above-mentioned musicians.

The show started , appropriately enough, with "First Song" from 1972's "Not Till Tomorrow" album. This is one of my favourite songs by Ralph and he did it proud.

Naturally, the show featured a number [ 7 actually] of songs from the very recent "Hill of Beans" album including the humorous , ragtime of " A Close Shave" , the perceptive title track , the lovely "Oxbow Lakes" , the atmospheric , accordion-driven "Gammel Dansk" and the reconciliatory anthem "Clear Water" , which he wrote for Fairport and on which the choir sounded magnificent tonight.

For me the highlight of the evening was a fantastic rendition of "From Clare to Here" which featured spoken word from Fergal Keane and vocals from Adrian Dunbar , not forgetting the totally authentic sound of John Sheahan's fiddle. Ralph's insightful lyrics about the loneliness of an Irish immigrant in London rang as true as ever. The same can be said for the wonderful orchestrated version of "Streets of London" which featured a duet between Ralph and Barbara Dickson. Again, Ralph's words are sadly just as relevant today as they were 50 years ago.

It is noteworthy that the last two songs of this wonderful evening were both about Bob Dylan , who was clearly a major influence on Ralph. The first of this pair was 1972's "Zimmerman Blues" which was followed by the encore, "West 4th Street and Jones" from this year's "Hill of Beans" , which describes the February 1963 scene on the cover of "The Freewheelin' Bob Dylan" in which Dylan and Suze Rotolo are walking arm-in-arm. This is the song that Ralph chose to perform on "Later With Jools Holland" last year, so it is obviously important to him.

And so this evening of superb music drew to a close. It was a pleasure and a privilege to share the 75th Birthday Celebration of this modest , unassuming but supremely talented man who ranks with the best lyricists that this country has produced.