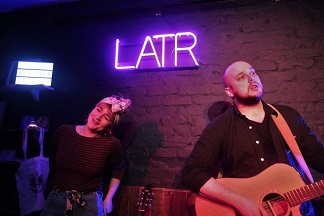 LaTR on Tap is a new off shoot of Live At Thornsett Rd, the series of successful series house concerts that Chris & Geri Keniger have been running their at their home for some five years. The On Tap series of gigs is billed as a 'Listening Room', set in the brewery tap room of the acclaimed Southey Brewery in Penge, South London. The aim of a listening room is to expand out of the more intimate setting of a house concert, while keeping the music unplugged and at the centre of the evening. All too often gigs in bars and pubs are an aural fight between the music and the general background racket, which precludes the purely acoustic.

The atmospheric Southey taproom was filled to bursting for this double header of Minnie Birch & Robert Lane who were at the start of a tour but the buzz of conversation was quickly stilled as Minnie Birch walked to the small "stage" and quickly had the audience spellbound. Minnie is a spell binding performer, almost like a cup of tea in a porcelain cup - fragile, ethereal, delicate and yet intoxicating. Her voice is soft but her songs take a grip on the listener, with subjects ranging from love and loss to football terrace chants.

Robert Lane, to stretch the tea metaphor to breaking point, is like a mug of strongly brewed tea. His performance is robust and immediate, and full flavoured. As Robert is a guitar teacher as well as a performer you might expect his guitar work to take front stage but he plays with an understated yet dynamic skill that underpins his songs without detracting attention from the stories he tells. His subjects are drawn from experience and life, covering diverse themes from homesickness to the tale of the Welshman that might have beaten the Wright Brothers into the air.

Minnie joined Robert for a rousing Always Look OnThe Bright Side of Life as an impromptu tribute to the late Terry Jones with the audience joining the chorus in full voice rounding the evening off nicely.

The Listening Room is a great concept that bridges that gap between house and public concerts nicely. Chris has three further shows booked, and hopes to extend to monthly shows with some interesting names lined up.