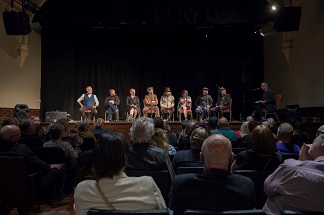 Merry Hell - A Year In The Life Film Premier

Merry Hell by name, Merry Hell by nature. Running a film premiere in the centre of town on the same day as the local road race might have challenged a few of us unfamiliar with the lie of the land. However, with Sat Nat to the rescue and the bonus of free parking in celebration of the Wigan 10K at least allowed us to wander towards the lovely Old Courts venue while taking in the sights of many of the contestants restocking on calories that they'd just shed in the name of their favourite charity via the plentiful stalls offering burgers and pies of all sorts.

Meanwhile, aside from some of the more serious athletes (the men's race winner had covered the distance in an impressive shade over thirty mins I believe) the group of Wigan's favourite and famous local musical sons (and daughter) were about to give us an insight into what it's like to be Merry Hell. No red carpets but an excited an orderly queue all greeted by the welcoming and genial presence whilst seriously hard grafting band manager Damian Liptrot. Most seemed almost as excited as the Merry's Bob Kettle, on film getting all passionate and dewy-eyed as he waxed lyrical about his passion and pride of being a Wiganner.

As Mark Radcliffe observed in his Q&A session that followed the screening, "The Song Remains the Same was crap," so how does a Folk Rock band from the Northern (Soul) hotspot of Wigan avoid the sort of meandering shenanigans that Page, Plant and co succumbed to back in the heady days of the Seventies? That was the challenge for band member Neil McCartney who recorded, filmed and edited what must have been a monumental amount of footage into a meaningful hour and a bit of the band's year. Surprisingly, no-one asked (not even Mr Radcliffe) asked "why?" yet the film seemed an extension of what the band regularly do on record and stage. Ordinary folks doing extraordinary things with the aim of sharing and spreading some much needed joy to the world. 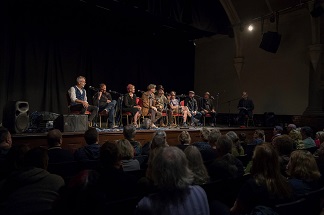 Granted there was a hint of the Richard Lester/Hard Days Night/Monty Python feel about the 'falling down' vignettes - fans will appreciate from the 'Bury Me Naked' video and not surprisingly, some of Andrew Kettle's hilarious soundbites stand out as well as his confession that you can get used to being a star. When you have a camera following you round for a year and then you go back to work on the building site you miss it. Fortunately it managed to capture some wonderful pearls of wisdom, while confirming John Kettle's opinion of himself as "the dourest member of the band."

Some of the band may appear more equal than others as Bob Kettle emerges as a bit of a star turn. "Yes, I did look for the bits with me in them," was his open and honest admission and while the Kettle name may be the core of the band, all were at pains to point out the family nature of the eight piece line up and the affinity with its audience. Witness (not on film sadly) Andrew's (not so drunken) serenade in the rain at the Cropredy Fringe in August.

So no, there were no great revelations or scenes of road madness - the only indulgence coming in the form of the rare treat of individual dressing rooms and generally a lot of fun. Heart warming, enlightening and passionate. Merry Hell to a tee. Can't wait for the outtakes though…

We Need Each Other Now