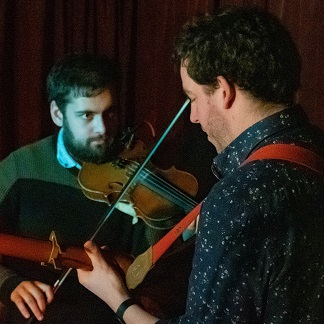 At what point does something become a tradition? For the third time in three years, I found myself heading to the Green Note in Camden to watch Matt Tighe and Tad Sargent for my first gig of the year and almost as traditionally, Matt was slightly under the weather with the end of a festive cold.

Having not eaten, the Green Note's selection of hot, vegan snacks, always seems to hit the mark, but in reality, this is probably as close as I'm going to get to Veganuary and with a good range of, mainly bottled, beers available any plans for staying dry had gone out of the window. 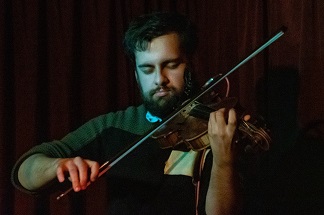 I've seen Matt & Tad perform on a number of occasions over the years, initially with Tad there as an accompanist, but more recently as a full-blown trio. This was also their first appearance since recording the bulk of the debut duo album, due out later in the year.

It's going to be a two set evening from the boys and it's time for them to start, Matt immediately seems to perk up as soon as he's got a fiddle in his hand and their off. As the set progresses, it's obvious that Tad, as well as playing bouzouki has also added more songs into the mix. There's normally been one or two, but this year they are more liberally sprinkled amongst the tunes.

Matt does most of the introductions, explains were the new tunes have come from, how they got named etc. as well as explaining why he doesn't do the singing. A number of the anecdotes, particularly the self-degenerating ones miraculously seem to end up pointing in the direction of the merch desk, he's definitely learning that craft.

The greater mix of songs seems to work, I know it sounds a bit lazy but an entire evening of instrumentals takes it out of me a bit. Particularly when you're hearing sets of tunes for the first time, I find it can be a bit energy draining maintaining the concentration levels, particularly as I haven't really got the reference points that a musician might have, it gives me a break and that helps bring the whole set more to life. 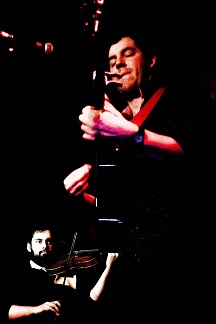 Matt and Tad don't do zero to one hundred sets and then stay at that high burn type sets, there is always a good mixture of pace and that really lets them play with the emotive quality of music, rather than making you feel you need to clap and whoop with every song, not that there's a lack of clapping and whooping opportunities.

Where percussion was required, Matt provided it with stomps though Tad did have a bodhran on stage. It remained surprisingly unused

This was a great start to the gig year, two musicians, very much at the top of their game and still on a high from putting a new album together. My only small criticism of an otherwise great evening was that maybe it could have started slightly earlier, but I'm not the logistics man. If this was the musical start to 2020, it bodes well, very well indeed.