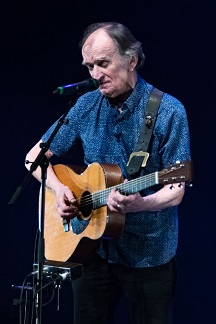 "It's been so long but it seems now that it was only yesterday". These lines by Willie Nelson from "Funny How Time Slips Away" came into my thoughts as I drove to the Bothy Folk Song Club for a performance by the great, magisterial Martin Carthy.

Can it really be 44 years since I first saw Martin play a folk club gig [ as opposed to a concert hall show ]? That gig , in November 1975 at Nottingham University Folk Club, sticks in my mind because , much to my surprise , I found myself sitting in the same train compartment as Martin on the way to the gig. As a young student, I was quite daunted to be in the presence of such an influential and highly-regarded musician but Martin put me at ease with his friendly, unassuming manner.

Fast forward to 2019, I am retired and of pensionable age but Martin , at the grand age of 78 years, is still travelling to gigs by train! Tonight's gig at The Bothy involved a round trip of 250 miles by railway. Quite remarkable.

Martin has always received a warm welcome at The Bothy, since making his first appearance here in 1967 with Dave Swarbrick [ although he thinks that there may have been an even earlier one than that].

Martin released his ground breaking first solo album "Martin Carthy" in 1965 and he opened tonight's performance with the first song on that album, "High Germany" , which he also played at that 1967 Bothy gig. It was immediately apparent that Martin's playing has lost none of its amazing dexterity and originality.

Martin is , of course , famous for introducing Paul Simon to "Scarborough Fair" but tonight his version of the song employed a different tune and lyrics , which Martin had recorded for the soundtrack to the TV series "Remember Me" which was set in Scarborough and starred the great Michael Palin. It was great to hear this different but charming version of the song.

Martin's two sets incorporated a host of seminal traditional English Folk Songs . We were treated to masterly, definitive versions of "A Sailor By My Right", "Young Morgan", "The Deserter", "The Two Sisters" [ or "Bows of London"], "Dream of Napoleon"[ which Martin learned from his hero Sam Larner "who changed my life"] and two rather risqué numbers ,"The Bedmaking" [ collected from Marina Russell of Weymouth] and the cross-dressing "Little Tailor".

The first song that Martin "wrote from scratch" was the superb "Company Policy" , a damning indictment of The Falklands War and the commercial interests that drove it. Martin's rendition of it tonight was full of controlled outrage.

Today [ 20th October] would have been the great Roy Bailey's 84th birthday and in tribute to his late musical cohort , Martin gave us an impromptu , unaccompanied version of Leon Rosselson's "The Ugly Ones" ,which they recorded together many years ago.

For an encore , Martin gave us a superb version of "A Stitch In Time" which was written by his late brother-in-law Mike Waterson. This tale of retribution is actually based on a true story in which , in 1962, a long-suffering wife from Hull stitched her drunken, violent husband into his bed ,so that she could gain her revenge by thrashing him with a pan.

This was a fantastic evening of music by an absolute master of his craft. There is a strong , mutual bond between Martin Carthy and The Bothy which stretches back for more than half a century. Martin loves playing folk clubs and was visibly moved by the warm, enthusiastic reception that he received from the Bothy crowd. Long may he keep on taking that train.

The Bows Of London