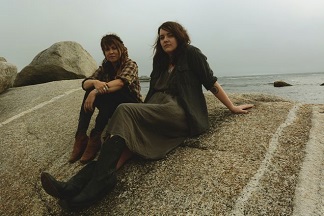 This gig was a late birthday surprise from my daughter Jen, who has been following Mama’s Broke’s music for a while. All I knew is that I was driving to Radcliffe ‘to see a gig’, and the Canadian duo exceeded expectations. You can’t beat an evening of live music, so forget YouTube for at least one night every month and get out there to witness music like this! Engaging performers and first class musicians, Amy Lou (vocals, banjo, guitar) and Lisa Maria (vocals fiddle, mandolin, guitar) grabbed the audience’s attention from the outset on one of the hottest, muggiest nights of the summer so far.

Mama’s Broke have toured extensively since their formation in 2014. “We’re on the road for about nine months of the year” was their introduction to “Dirty Mattresses” from their 11 track debut album “Count The Wicked” (2017). Strongly influenced by their Canadian roots, they have also drawn from European cultures and music genres to produce a live show that has something for everyone but still feels very much their own.

Last night’s show saw Mama’s Broke deliver a range of sounds from Americana and jazz-blues, new arrangements of traditional songs and original songs, together with Latin and Balkan songs. There is a thread of folk music that runs from Eastern Europe into the Americas that we can all identify with. The two mixed acapella ballads with fiddlesticks, and some enviable mandolin, rhythmic guitar and banjo to deliver the best live acoustic performances I’ve seen this year. Were it not for an injury to Lisa’s knee, their music portfolio would also have included podorythmie (traditional French Canadian foot drumming used by bands such as Le Vent Du Nord), but the rhythm was there anyway and the audience’s feet were still sent tapping. Something to look forward to next time.

The evening was divided into two sets, the first comprising mostly their original material and the second leaning more towards the traditional, after which there was a genuine and thoroughly deserved encore demanded by an audience who could probably have listened to them sing all night long.

Vocals. I haven’t mentioned the vocals. How could I not mention the vocals! Amy Lou’s lead vocal is powerful yet fervent and warm and perfectly matched by Lisa Maria’s skillfully placed and perfectly timed backing vocals, at times duelling with her singing partner while simultaneously turning out fiddle or mandolin pieces that most of us would find difficult just to play. It is not an exaggeration to compare the quality of their vocal harmonies with “I’m With Her”, nor their playing to some of the best folk and acoustic musicians on the circuit.

‘Ensemble of the Year’ in the Canadian Folk Music Awards (2017) and nominees for ‘Rising Star Recording of the Year’ in the East Coast Music Awards (2018), this duo are going places, so have a listen to their music because you will want to go along with them. Back in the day, I would go to gigs without knowing what to expect and I almost always emerged better for not knowing. That element of surprise, combined with a performance where this quality act gave their all made for a truly fabulous evening.