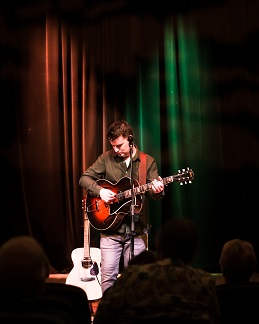 Bournemouth Folk Club welcomed Jim Moray to the historic Shelley Theatre for a night of new music drawn from his 'The Outlander' album, mixed with some carefully selected songs from his extensive back catalogue.

Instrumentally, the concert was stripped back to guitar and voice with occasional concertina, but the arrangements remain expansive and richly textured, employing imaginative harmony and subtly layered effects blended into the performance with genuine musicality.

The song choices took us on a grand tour of folk song themes, with more than a smattering of Lords lost in adventurous ballads and a handful of pirates too. Jim also made a special effort to remedy his lack of highwayman songs with favourites including Bold Lovell. Alongside this, there was also an opportunity to hear some of his original repertoire, including the beautiful Sounds of Earth which held the audience spellbound as the story of the Voyager spacecraft was unravelled intertwined with the meeting of Carl Sagan and his future wife, Anne.

At points across the evening, he unleashed a powerful soaring vocal in pleasing contrast to more restrained and delicate readings of other ballads. Where some of the stories favoured a direct vocal, in St Helena, for example, he demonstrated his dexterity in the satisfying descending melodies that accompanied this tale of exile.

Between the songs Jim had a warm rapport with the audience, drawing the entire theatre into a relaxed and intimate conversation as he shared the history and inspiration behind some of the music. The provenance of the traditional songs was shared where appropriate along with some of the places he first encountered them, whether a face to face setting, or the established traditional method of learning tunes from old vinyl.

Jim was engaging from start to finish, with plenty of humorous asides between expertly performed songs. He was also more than happy to oblige the audience by going off-setlist and playing a handful of requested numbers.