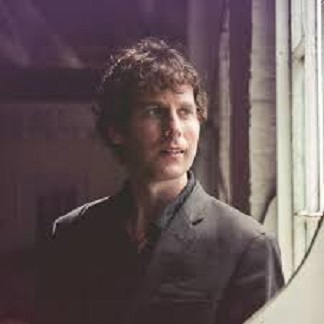 For me, this was a first on the first, having never been to this venue before. Located right beside the China town arch, three cultures sit in harmony.

Unusually, the show was a 2pm start: I could definitely do more Sunday afternoon shows! The performance even get moved into the larger room, which is surely a great indicator of the esteem in which he is held in these parts.

It was also an absolute pleasure to meet Jesse's wife, Jess, and their beautiful baby girl, Lily. I think we all had a sense of knowing them already, through Jesse's stories, but it is lovely to meet face to face. Another unexpected surprise came in the form of singer songwriter, Callaghan, who joined us as a member of the audience. There is something very touching about witnessing artists support each other on this way; it demonstrates that there really is a community full of connections and friendships within our musical circle.

A new name to us all delivered a couple of original songs, accompanying himself on keys, to start the afternoon off; local musician Nadeem Shakir, who I cannot believe is only seventeen! His vocal, personality, confidence and talent, all left me convinced he was at least twenty. He reminded me a little of a young Elton John, vocally and musically. Definitely a name to watch.

Clearly delighted to be back in Newcastle, Jesse took to the stage, with his almost trademark smile; a smile which was present for his entire performance. He has such a warm, charismatic personality, that you just cannot help but be drawn into his stories and anecdotes, all delivered with a wonderful sense of humour and humanity.

Backed by Alan and Naseem on guitar, keyboard and fabnulous harmony vocals, he treated us to a variety of well loved songs. One of my favourites, Runaway Town, was inspited by a friend's comment about Nashville. Stargazer, brought to many of our attentions via his friend Sarah Darling, is perhaps his finest piece of writing. Beautiful and ethereal, it quite simply demands silence.

A couple of songs were featured from his current EP about Alaska; Nowhere had a great sound live. It sounds like a fascinating project and they have an opportunity to visit Alaska next year.

Alan Fish has the opportunity to showcase a couple of his songs; Song for tomorrow, which he told us he wrote long before Greta Thunberg, seemed hauntingly relevant to the times in which we currently find ourselves dwelling.

We were introduced to a few new songs from Jesse's upcoming album, which he will be releasing here in October 2020. That is definitely going to be one worth waiting for!

Having met them, it was wonderful to hear The Innocent Ones and If Were the Moon, written for Jess and Lily, respectively.

Some unexpected covers came in the form of Fire and Rain by James Taylor, Starry Night by Don Maclean and the traditional The Water is Wide; all were striking in that he retained the integrity of the original but made them his own.

Nadeem was invited to take centre stage, for a cover of Bruno Mars; When I was a Young Man, which more than impressed everyone listening.

All too soon, it was all over, with an an encore that included Harvest Moon. His genuine appreciation that we has all spent Sunday afternoon together, was quite moving. Which leads me to another point which makes make this man very special; he is just as lovely in person as on stage. He chats to anyone who wishes to say and greets everyone he has previously met with the biggest warmest hug, to let them know they are appreciated.