One of my favourite parts of the Cambridge Folk Festival is the Brian McNeil session on the Saturday morning. It's a glorified floor spot just like you get at your local folk club, except there can be some really big names in the queue waiting to play their two songs. In 2019 I was particularly pleased to see Amy Goddard involved. What I hadn't realised that it was going to be the start of something very special. Thanks to a couple of judicious introductions by our own Neil King, Amy met up with Odette Michell and Zoe Wren. It turned out they knew one song in common so on the spur of the moment they decided to form a trio, which needed a name. Within five minutes they'd decided to call themselves The Honeybees and were are a trio with a real buzz about them. I promise that's the last pun. However, would it prove to be just a one-off on the day?

The answer turned out to be "no" and they were fortunate to find a promoter who would not only take a chance on something untried but be able to locate a perfect venue for them. Folkandroots, the new name for the 2019 FATEA Tradition winner Folk on Monday, has spent the last ten years giving new bands a chance to play in London and head of operations Graham Smallwood knows a winner when he sees one. That's why I found myself heading to a vegan cafe in Bethnal Green to see one of the biggest collections of FATEA award winner you'll come across outside a festival stage.

The venue, Gallery Café, is part of St Margaret's House which is a charity supporting creativity & wellbeing in Bethnal Green. All the profits from the café go back in to the charity and they do a good range of food, soft drinks, craft beers and excellent coffee. The room is intimate and has both good lighting and sound. It's a place where you can sit back, relax and let the evening unfold. It also has the advantage of being open to the public during the day which means there's no queueing outside waiting for the doors to open; a big advantage in the middle of January. Perhaps the disadvantage for the performers is that they have to soundcheck live, although it sounded very good right from the start.

As for the music, I knew this was going to be a good evening. I've seen all performers on numerous occasions in the past and the certainly sit on my favourites list. All three are excellent singers and songwriters who broadly sit in the category of "folk" but have a much wider range of influences than that. So, what I was expecting from the evening was a songwriter's circle, the stage was certainly laid out that way, with perhaps a couple of collaborations. What I didn't expect was a real trio, each bringing their own songs it's true, but with far more than just backing vocals and supporting chords from the others. The songs, many of which the audience were familiar with, were given a new life and a fresh approach with intricate harmonies and a fuller sound from the multiple instruments. Odette Michell gave bouzouki and guitar, Amy Goddard had two guitars whilst Zoe Wren played guitar and gave a first outing to her new mandolin. Whilst not yet completely proficient on it her precise, picked style suited the music very well.

The evening opened with that song from Cambridge, which was "Caledonia". It was a good choice as everyone knew it and joined in. The evening was already off to a flying start. Zoe took the first original song slot with "She's a Highwayman", followed by "Mockingbird" from Odette and then "Gladdie" from Amy. Four songs in to the night and emotions had been pulled from homesickness to derring-do, pastoral scenes to the horrors of trench warfare.

One of the delights of the show was to see the others realise they had heard a song before, because they're all listening to each other's albums, so they'd join in with the chorus just like the audience - but with a lot more quality. The stage and the floor became one. With such talented writers on show the range of songs was phenomenal. Amy Goddard bought tears to many eyes with "Aberfan", a story of a tragedy of almost Greek proportions, before Zoe made us laugh with "Don't Touch My Guitar" , a bit of pure Americana set in the heart of London. The first half closed with "Farewell To The Gold", the Paul Metsers song that's familiar to anyone regularly attending folk clubs and we all had a chance to join in again. 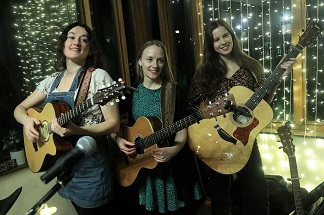 After a break and the chance for a chat the second half opened with another familiar song, this time Richard Thompson's "Beeswing". It took one of the trio, no names, a while to realise why The Honeybees might consider singing this one! It was a lovely version and well received, as all the songs were.

Jumping ahead slightly another join in was "Who Knows Where The Time Goes" and for a song that is so familiar it was handled very well indeed. Each of the trio sing it in their solo sets, but in a slightly different way. Instead of finding a common version they each took a verse in their own style but these were close enough to different without clashing so we almost had a mash-up of one song. That's a great sign of the confidence each has in their own ability and gave the audience something new.

The second half was just as good as the first, with spectacular songs from each performer and solid standards. The call for an encore started before anyone had even thought of leaving the stage and was a genuine desire by the audience to hear more. I'm sure none of us wanted the evening to end and we rewarded for that with "Wild Mountain Thyme", surely folk music's greatest anthem.

I knew this was was going to be a good evening and I'd set the bar very high. My expectations were smashed over the horizon and it's one of those evening where I will able to say "I was there". The reputation of this trio has gone before them and they are already being approached for future dates. This could be the start of something very special.