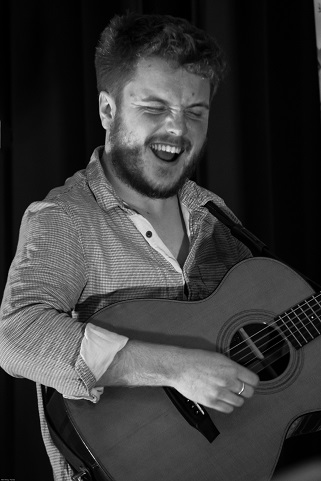 Driving to the show, observing the effects of damage wreaked by the recent Ciara and Dennis Storms on the beautiful Kentish Wealden countryside, I reflected on the fact that whilst I had enjoyed seeing and hearing Greg live in a variety of settings, with Ciaran Algar, The Transports, Shake the Chains (x3), a Peter Bellamy concert with Aldeburgh Young Musicians and, more recently, twice on his Fields And Dykes Tour with his great friend Danny Pedler, I hadn't actually ever seen him perform in a solo capacity. Thus there was some degree of anticipation as to what the set-list might contain.

Thoughts that material from his, so far only, solo release, the marvellous Inclined To Be Red, (reviewed in FATEA here), would feature were to be well-founded, three tracks from his recorded output with Ciaran, a song, (or two - explanation to follow), from Field and Dyke, one or two from other projects in which he has been involved, together with some terrific interpretations, I choose this word deliberately rather than 'covers', provided for a magical evening.

The artistic device of launching straight into two songs, saving explanation and words of welcome until the enthusiastic applause which greeted the end the second one had died down, was both dramatic and appropriate, immediately focussing eyes and ears on the musical content. And what high quality content that was. Opening song, a superb version of Karan Casey's I'm Still Standing, from her 2018 album 'Hieroglyphs That Tell The Tale', held the audience spellbound from the get-go. (Video of the performance here). Moving straight into Icarus, from the Russell & Algar 'The Queen's Lover' album, Greg did full justice to this beautiful Anne Lister song, rendering a delivery which matched that of the great Nic Jones.

The spoken words which followed these two songs exemplified Greg's easy-going manner and sardonic humour, which straightway shone through, and indeed continued throughout the evening, providing both amusing and, at times, poignant, links between the songs.

The Road To Dorchester, the first of three songs in his first set to be taken from his Inclined release, was one of several on tonight's list representing social/political/protest themes which are both close to his heart and which inform many aspects of his work. This Graham Moore & Mick Ryan song imagines asking questions of the six Tolpuddle Martyrs on their way to Dorchester and provided the first chance for the audience to engage in chorus- singing, an opportunity they took up with alacrity.

Following a comical tale involving a Radio 2 Road Show, Westlife & Kylie, in what was possibly the first outing for a 1970's disco hit at the club, we were regaled, improbable as it may sound, with a very tasteful version of 1978's Gloria Gaynor hit, I Will Survive; a reprise of one of Greg's contributions to the Band Of Love project, which appears on their 2018 Island Records 'Folk Fever' album ( I am not making this up!)

With Line Two, Greg's ascerbic comment on aspects of the impact of HS2, the opening track on the wonderful 'Utopia & Wasteland' CD and two more songs from Inclined, Si Kahn's What You Do With What You've Got, and a spellbinding performance of Christine Lavin's Tomorrow You're Gone, with its lyrics about the life of a gigging musician, which, understandably, resonates strongly with him, an all-too brief first set came to an end, leaving the enthusuastic audience to enjoy the bar and raffle, and Mr.Russell to savour more tea and lemon drizzle cake.

The First World War is one of Greg's many fields of expertise, check out, for example, his Walter song, and the second set began with one of two of tonight's offerings directly referencing this conflict. Did You Like The Battle, Sir?, the vitriolic John Richards & Bev Pegg anti-war song recorded by Greg & Ciaran on their 'The Silent Majority' release, with its emotive lyrics, such as "Did your men fight well my lord, oh did your men fight well? How many did you leave there in the everglades of hell?, along with God Or Union, a song referencing conscientious objection/objectors, taken from the 2019 War And Peace project undertaken by Greg, Findlay Napier & Bella Hardy in which songs, inspired by stories those who fought, refused to fight or were left behind, were created following extensive studying of Doncaster archives and stories from 1914-1918. Received with utter respect by those present, these two songs had particular poignance tonight, as the venue, St Edith Hall, was one of Kent's V.A.D. hospitals used to treat casualties from the Western Front. (Video of the performance here).

Between these two pieces, the fourth track from Inclined, the unaccompanied Wily Ole Lad, gave further proof, if any were needed, of the power, strength and quality of Greg's voice. (Video of the performance here). The title track from Field and Dyke sounded terrific, despite lacking the sound of the machine that sprays tomato sauce onto pizzas, whilst a song that from the aforemention F&D project that didn't make the album, and hitherto has been untitled, possibly now is called Reality, and is another cracker.

The penultimate song of the evening My Flower, MyCompanion And Me, penned by the late Helen Schneyer, and recorded by Norma Waterson in 2000, was magnificently delivered, and, following such a marvellous set, an extremely well-deserved, and warranted, encore was inevitable.

The final song raised an already high bar into the stratosphere. Tonight's rendition of Something Inside So Strong, the Labi Siffre song written 1984, which became a big hit for him in 1987, was nothing short of sublime. "The higher you build your barriers, The taller I become"..."The more you refuse to hear my voice, The louder I will sing" - truly inspirational. as he departed the stage Greg was heard to say "I'm not going to top that", few would argue.

In his introduction, the Club organiser promised that Greg would deliver an evening of reflection and introversion. He certainly succeeed on both counts. Add into the mix a highly engaging, often self-deprecating, demeanour, musicanship and vocals of the highest calibre, songs which leave an indelible mark and it is clear that, in Greg Russell, the current, and future, health of contemporary music in this country is in very good hands.

A brief word about the support act who performed tonight, Arfur Doo & The Toerags. Energetic and thoroughly entertaining, this Essex quintet of self-proclaimed 'original folk rejects' regaled the audience with lively traditional folk tune sets, along with great versions of classics such as Blackleg Miner and Alison Gross. Their two CDs are worth seeking out, and catching them live is highly recommended.