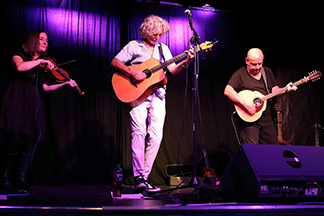 The opening set was delivered by York based duo Me Thee & E. That is not a typo! The duo of Evie and Tom deliver a very laid-back folk inspired set, seated on bar stools. It makes the audience feel as though they are in a mansion drawing room attending a private concert. Evie has a stunning classic/folk voice which is perfectly matched by Tom's simple but skilful and effective guitar backing. Singing their own material with their heartfelt lyrics, the session was a delight from start to finish. They deserve to be more than a support act.

Next on stage was Glasgow based Chris Ashton or Crashton as he refers to himself. Chris is a young man who plays his acoustic Fender with what appears to be pent up anger such is the drive of his playing. I did fear for the survival of his instrument at times. His voice has a much softer cadence to it and at times resembles Bruno Mars. His songs, all self-penned, reflect his views on life with a passion that is both delightful and insightful. This young man will go far.

Graeme Clark then came on stage to loud applause to enchant the gathering with his songs, all of which were interspersed with his memories and stories delivered with his Glaswegian humour and accent. He admits that he was not sure about going solo but he quite obviously loves it and is totally at home on stage and seems to be at one with his life.

Graeme's trio consists of himself on acoustic guitar and ukulele, Stevie Lawrence on Mandolin and the amazing Fiona Cuthill on Fiddle. This is arguably not the conventional instrument line up for a trio but it works superbly and gives a whole new life to some of the Wet Wet Wet classics in a new stripped back style.

With a mix of self-penned songs and some Wet Wet Wet favourites, the session flew by. Graeme admits to being a cynic but I would rather describe him as a man that has seen most things in his musical journey and has both enjoyed and questioned them. He is very critical of the state of the music industry just now and the lack of rewards that are available to the artists. This demonstrates why it to so important to support these local venues which are the heartbeat of music and which, without support, will die.

Graeme finished his set with two more Wet Wet Wet classics which had the audience joining in, the finale being "Love Is All Around." This was the perfect ending as it subtly and accurately described the atmosphere of the evening and left the audience with a wonderful warm glow for their homeward journey. I had the good fortune to meet Graeme and Chris before the event in the local fish and chip shop and chatted to them both. For me, it just made the whole evening almost complete. If Graeme had paid for my supper, then it would have been perfect, but then he is a Scotsman.