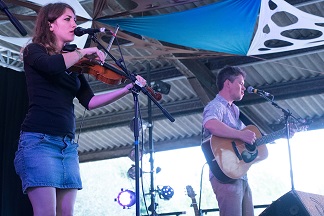 It comes as quite a jolt to remember that the then musical partners, Gilmore & Roberts, released their first album Shadows and Half Light in 2009, and their landmark The Innocent Left was as long ago as 2012. They have emerged in the intervening years as superb songwriters, firmly within the English Folk tradition, but with a contemporary twist, and a considerable back catalogue of modern classics, building up a devoted following along the way, one hundred and thirty of whom packed into their small front room, for an intimate house concert.

They opened their set with Stumble on the Seam from Conflict Tourism, a young miner in Derbyshire spending a lifetime seeking mythical prize, the story rich in metaphor, and with urgent, choppy rhythms, leading into Gauntlet from their fifth and most recent release, A Problem of our Kind, telling of the last trial by battle, as recently as the early nineteenth century. From the same album, and inspired by the real life of Laurie Marsh, Jamie's the Philanthropist, came next with its lilting refrain is followed by the classic Stealing Arm, featuring his trademark lap guitar percussive style.

All are loudly applauded by the enthusiastic crowd, as we move into the meet the artist section of the show. And then the room lights up, as the bond between artist and audience becomes evident, the thoughtful MC and nature of the venue, both encouraging intimacy.

A young couple request the song they fell in love to, at a concert, seven years ago; a woman has travelled from the USA to attend, bleary eyed, it is 7 a.m. for her; a child shows a picture they have drawn. Most touching is the woman who describes how the band's music has given her the strength to overcome a life changing illness.

This was folk music and a festival audience at its very best. A congregation, connecting the old stories with the contemporary, a bonding, a catharsis, art of and for a community.

There are those that said Cat McGill was bonkers for pressing ahead with the Oxford Folk weekend, for this was not just a concert, but a full festival, featuring sessions, ceilidhs and the cream of current performers. This magnificent edifice was enabled by some jaw dropping IT wizardry from tech-savvy Pete Ord, a virtuoso performance, playing Zoom like a fiddle, inspired by Cat's, vision and supported by a large and enthusiastic cast of volunteers, shining a light in the darkest of times.

The nervous MC started looking at the time, as the clock ticked down, and the pair were showered with more requests than could possibly be fitted in. The music resumed, we had time for three more numbers, with the standout Cecilia, their acoustic version at least as urgent as the album version, the powerful Dr James and concluded with the achingly beautiful Louis was a Boxer, before loud calls for an encore were interrupted by the baby.

But, later, Kat and Jamie recorded the many un-met requests for a private YouTube set, audience members only, and we got to see a photo of baby Rosalie.

A triumph, Bravo all.