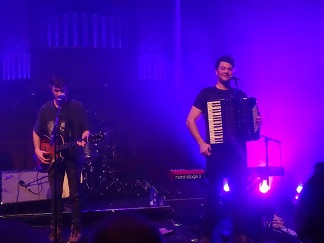 When I find myself smiling during a gig and look around to discover I'm not alone it's a sign that something really rather wonderful is going on.

The Felice Brothers were in marvellous form for this Celtic Connections' show - relaxed, sprightly, engaging, rugged, even muddled at times and it all added up to memorable performance with song after song blowing out over a crowd who willed them on throughout.

The former New York City busking brothers, Ian and James now have Will Lawrence (drums) and Jesske Hume (bass) in the band and together this is potent, energetic unit delivers a rollicking mix of folk/rock, spikey Americana and shards of punk.

Special Announcement from current album, "Undress" has a sassy flow to contradict the sarcastic lyrics mocking how politics is financed. Ian Felice snarls: "I'm saving up my money /
To be president / I can promise more berries / On Blueberry Hill /
I can promise you this Charlie Parker on the ten dollar bill." He is a fine wordsmith, indeed.

Salvation Army Girl from Undress fires out in a hearty, good old fashioned slab of punk and James Felice, who's the kinda guy I'd want at party, leads an uproarious version of the 2007 song, Whiskey On My Whiskey, swaying and smiling as he weaves great sounds from his accordion, making Ian and bandmates - and all of us grin. A storming song by a brilliant band lustily encouraged by a Friday night Glasgow crowd.

When Wonderful Life eases our way to encapsulate the joy and pleasure in the room. It's a gorgeous song and Ian's heartfelt vocals allied to the band's harmonies elevated it to the level of transcendental. "Throw your arms around me / Let's keep this quiet / Hear our hearts in the distance like cannon fire / See our breath in the window, in the turning light / Oh it's a wonderful life // it is and it summed up a perfect performance - and I'm still smiling.

Well worth mentioning is, Austin, Texas-based, singer/songwriter Carson McHone, who opened up as she gets better and better every time I see her. With tracks from her 2019 release, Carousel, including the provocative "I Need Drugs," she was assured and merits further attention.

The excellent bill was completed by husband and wife duo, The Rails whose set was edgy and accomplished. Kami Thompson (daughter of Linda and Richard Thompson) sings with great heart while James Walbourne (formerly of The Pogues and The Pretenders) is a stunning guitarist, Mossy Well from their third and current album, "Cancel The Sun" was a standout in a strong set.