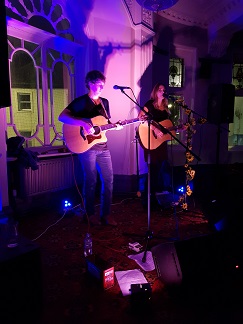 The newly refurbished Black Horse provided the venue for a quite magical evening of music on a wet and cold October evening in Otley. The evening was advertised as "The stories behind the songs" and the natural charm of the two singers on show soon warmed the audience up.

The gig was shared by England's Emma Stevens and America's Jesse Terry. I have been a fan of Emma's since I first heard and saw her about 6 years ago. I have since reviewed most of her albums for FATEA and have truly loved them all. I knew very little about Jesse before the event other than watching a couple of videos on YouTube. Having met him now and listened to him perform live, I am now a very big fan of this multi-talented singer songwriter.

The evening opened up with the delightful and heart-warming music of Emma Stevens delivering her particular brand of light thoughtful pop music. She writes music from the heart and delivers it with a voice and personality that will light up any venue. I have written in the past that Emma makes me feel better about life and her stories help to understand both her attitude to the world and her music so much better. She not only sings with a spring in her voice, she also writes the most thought provoking lyrics. Accompanying herself on guitar and ukulele, not at the same time, her 45-minute set simply flew by. Although much of her music has a driving rhythm to it, the two outstanding songs, at least for me, were the beautiful "Sunflower" and the life questioning "Atoms." The stories surrounding both songs were worth the admission fee alone.

Emma performs on a regular basis in the UK and I would strongly recommend her shows to anyone who wants to see and listen to a genuinely talented musician with heart. Surprisingly, thanks to the power of TV advertising, she now has a large following in China where she has recently toured. This is a story which she can explain far better when you see her in concert.

Jesse Taylor came on the stage, such as it was, after a short break and immediately endeared himself to the audience with his soft American accent and humour. If he gets fed up with making and writing music, he could easily forge a new career as a stand-up comedian. Just like Emma he has a personality that makes the audience feel that their attendance really matters to him with a genuine warmth and compassion.

Jesse's music is firmly embedded in the sound of Nashville where he lived for a number of years both performing and writing songs. He again accompanied himself like Emma on an acoustic guitar played with a mix of plectrum and finger style playing. He now lives with his wife and child in New England and uses both his family and his surroundings as an inspiration for his lyrics and music.

His performance contained a number of previously released songs and a few from his new album to be released in 2020. One of the songs on this is a lullaby which he has written for his 14 month old daughter. Entitled "If I Were The Moon" it perfectly captures the hopes and dreams of a parent and personifies Jesse's attitude to life. I hope it is OK to admit that this brought a tear to my eye. He finished his set with the beautiful "Stargazer" which he wrote but which, up to now at least, I had only ever heard from Sarah Darling.

To close the show, Jesse brought Emma back to sing a duet. The choice of Tom Petty's "Free Fallin" was inspired and made the perfect ending to what was a night of musical magic. Having been to many gigs this year, I believe that this one gave the most enjoyment to me such was the strength of the musical performances and the warmth of the two performers on show. It is a gig that will remain in the memory for a long time to come and will be looked back on with genuine affection.

I do find the music industry quite frustrating at times. Here we have two incredibly talented artistes performing in a pub whilst so called "stars" with a fraction of Emma and Jesse's talent fill stadiums. It is an odd world at times.