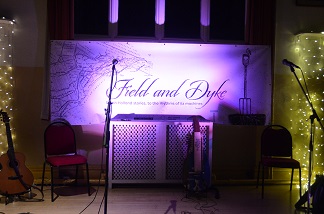 If I was asked to give a list of my favourite albums for 2019, then Field And Dyke, by Danny Pedler and Greg Russell, released in May of that year, and reviewed in FATEA here, would most certainly feature. The promise that the duo would tour the project in 2020 was an enticing one, although I have to admit that, given the nature of the recording, with its dialogue samples and sounds gleaned from contemporary industry, how this would transfer to a live setting was an intriguing question. To cut to the chase, on the evidence of tonight's performance, the answer is seamlessly, Danny and Greg nailed it perfectly.

For those unaware of the background, and chatting to several present tonight in the depths of Surrey there were many for whom that was the case, perhaps understandably given its geographical distance from the Fens, this run of concerts is the culmination of what is a fascinating project, (and full credit to the Dorking promoters, Good Honest Folk, for bringing the show down).

With its birth in a 2017 oral history research project conducted by folklore historian and musician Danny in the agricultural Fenland district of South Holland in Lincolnshire, the work combines traditional music with the sounds of industry, whilst also incorporating samples of dialogue from the Field And Dyke interviewees, and recordings of factory and field machine rhythms. Two-time BBC Radio Folk Award winner Greg Russell joined the project some 18 months ago. Thus brand new songs were created, ostensibly for the folk of the region, as a vehicle to communicate the feeling behind themes, including history, culture, environment, politics and society, present in 21st Century England.

Without wishing to spoil the evening for those still to attend a performance, I will restrict myself to saying that yes, all of the songs on the album were played tonight, alongside two additional, and highly relevant, pieces not on the album. Recreating the sound of dough-provers, Ruston & Hornsby and Lister engines and the Delta 3000, not to mention the recorded oral testimonies, cannot have been an easy feat, but Danny's technological skill in this respect ensured that it worked to perfection.

The Field and Dyke live performance was totally captivating, and as remarkably a refreshing and innovative experience as the album itself, indeed in many ways it exceeded my, already high, expectations. Not only was the quality of the music performed sublime, but significantly the themes of community, immigration and environment, originally focussed on a specific locality, with its own grass roots history, resonated just as fully with the audience here tonight, succeeding in managing to be both educational and informative, but above all, enjoyable. Folk music at its very best.

It may still only be January, but if, at the end of the year, I am asked to give a list of my favourite live gigs of 2020, it is difficult to imagine tonight's performance not being included.

This project has been funded by Arts Council England, Freshlinc and Transported.