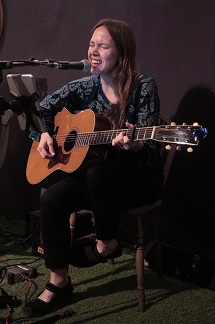 There are real advantages in getting to know music promoters. They have a vested interested in only putting on quality music and so you can trust their judgement. That was why I took the short trip to Boxmoor to see an artist who was new to me and I knew very little about. It turned out to be a very wise decision because I found a real gem in Bronwynne Brent, who had come all the way from Mississippi to give a sell-out audience a wonderful night of music.

Thanks to Alan Rooke of Fishery Wharf, which is a café on the banks of the Grand Union Canal during the day serving some lovely food and a good range of drinks in a peaceful setting, I had a chance to talk to Bronwynne before the show.

I wondered how she'd got in to music in the first place? Bronwynne comes from a family with a long tradition of singing and deep roots along the river. Learning tunes from their Grandmother, and listening to their parents, she and her sisters (Eden and Jessica) have all established themselves and released albums.

Being from Mississippi, blues and country are obviously big influences but as Bronwynne said "I play the songs I like" At the moment R&B from Bobby Womack and Sister Rosetta are influences, but so are soul and even jazz. She doesn't sit down to write a song in any particular genre but goes in whatever direction those styles lead her.

Before taking my seat I wanted to know what we could expect from the night, and what was Bronwynne's wish for an audience, most of whom hadn't seen her before? There would be songs from her three albums, "Deep Black Water", "Stardust" and the new album "Undercover" which was released at the end of February. As for her hopes for the night? Bronwynne wanted the audience to have fun, that's the main thing to take away from it. We did discuss "fun" in the traditional folk sense of the word and decided that the happy songs may be because nobody had died. So it turned out! 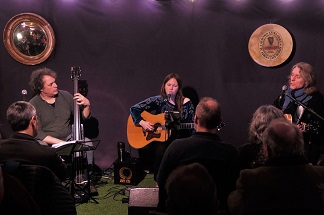 The show took place in "The Shed" and this was end of an era. It's soon to be replaced by a bigger, purpose built space that will have a proper floor and a stage. At a time when music venues are closing on a regular basis it's good to see such a statement of confidence in the future. A town like Hemel Hempstead, which has a population of just under 100,000, does have a severe lack of music compared to near-by Watford or St Albans. The current venue regularly attracts sell-out audiences of around 50 so a quality one will attract more and should do well. It's only a five minute walk from the train station, which is 30 minutes from Euston or Milton Keynes so has a huge potential catchment.

For the show Bronwynne was accompanied by Mario Caribé on bass and Kevin Barrett on lead guitar, who are real quality. Both are from a jazz background and that gave Bronwynne's music a real lift, although she doesn't play jazz herself. As she freely admits, she doesn't know the chords.

To play to a group of people, most of whom have never seen you before, must be daunting be we were all won over very quickly by her charm and openness as well as the quality of the songs. Bronwynne has that Southern voice that was made for blues and soul. It has a smokiness to it that brings out the emotion of a song, especially the darker undertones of life in all its forms. "Devil Again" is about addiction and how that devil can return to destroy not only the addict but those around around them. Several of the songs, such as "I Walked Away" and "Raincoat" are about relationships that are going cold

"Raincoat" started with a laugh from the audience at the opening lines
'I gave you my body, you gave me a raincoat,
You gave me a raincoat I didn't know I needed.'
The laughs went away as we listened to the emotions being laid bare and the sense of loss and regret that comes with it.

Autobiography played its part, too. "Don't Tell Your secrets To The Wind" is a song from her youth where a friend offered to help let a boy know he was fancied, and then stole his heart. It wasn't all doom and gloom. Thanks to Mario and Kevin there were several bossa nova songs that gave a real swing to the evening and some well chosen covers, including Ella Fitzgerald's "Saving Myself for You". 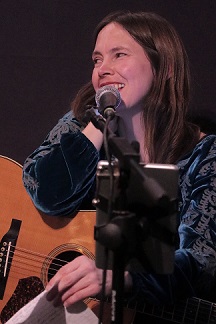 A surprise, perhaps, was the introduction of a song which Bronwynne says is her favourite on the new album; the English version of Jaques Brel's "Je Me Quitter Pas". I mainly knew this song from Dusty Springfield, but Bronwynne made the character stronger and less pleading. There was still the sadness of inevitable separation and promise of making it better, but it became a powerful song that moved the audience.

I could list every song played on the night. They were all good, none were fillers, and the audience enjoyed each one. There was a real sense of sorrow that the night had to come to an end. It was pointed out that with three albums of material, and covers, we could have kept going for a few more hours and I'm not sure many would have left if that was the case.

Bronwynne certainly achieved her aim of giving her audience a fun evening. It wasn't fun in the sense of dancing in the aisles, but more joy in listening to somebody who gives such pleasure and so obviously enjoys performing.

The earlier albums are available through the website, the new one isn't up yet probably because of the tour which continues until the end of March with dates around the country. On balance going to one of those, and experiencing a songwriter of real quality, is probably the best way to get hold of it.