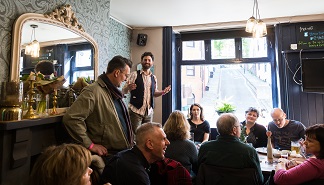 There's often temptation to tear through the paper to reveal the gift inside, but in the case of Bristol Folk Festival, even the packaging deserves a mention before we get to the main event. Clear, eye catching visuals advertised a great line-up, and among their marketing material is the ultimate tool for planning your festival experience: a concise listing of events by venue, day and time allowing you to quickly spot potential clashes between your wishlist artists (and with a line-up like this I wish I could have been in three places at once).

The weekend took place across three venues within walking distance in the centre of the city, focused around Bristol’s iconic Park Street with its never-ending parade of independent retailers and convenient food outlets for festival goers.

St Stephen’s Church offered a listening experience filled with atmosphere and ambience, with two bars, and a pop-up record shop complete with artist merchandise beyond the stage. The impressive stained glass windows are already an eye-catching backdrop for the dynamic acts programmed there, and the church aesthetic was further heightened by modern artworks and a bespoke series of vibrant panels behind the altar. 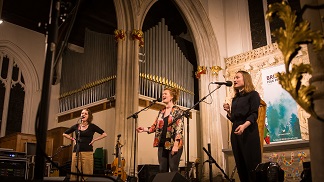 Ian A Anderson opened the 2019 festival at St Stephen’s on Friday night. His witty manner coupled with some keen observations about the sheer extent of the death toll in his set drew some genuine laughter from the audience, and he had the church singing along with some great bluesy numbers before handing over to Kim Lowings. Kim’s set began with a piano lead song, Firestone, perfectly understated and a great showcase for the range and colour of her voice. Kim proved herself a gifted multi-instrumentalist, stepping away from the piano to play the guitar as well as the Appalachian Dulcimer that is the core of the infectious song Away Ye Merry Lasses. Kim also welcomed her father, Andrew Lowings to the stage, himself a very proficient instrumentalist. Trying to fit in as much as possible was quite a task, but it would have been near impossible to justify passing up the chance to hear Harri Endersby singing live in the perfect acoustic of St Stephen’s church.

At St Stephen’s on the Saturday evening, folk quartet Road Not Taken offered folk with a decidedly refined flourish. The textures were varied, from light ostinato patterns that developed gently under the vocals to reedy symphonic sounds from the harmonium and violin that played against driving rhythms. This was folk with all the feels of the romantic period composers, with richly ornamented chords and harmonies filled with suspensions and glistening resolutions.

Closing the night at St Stephen’s was the virtuosic Lady Maisery, a trio like no other on the British folk scene. Their set got off to a rather joyous start as Hannah James revealed her earlier accordion malfunction had been successfully repaired in time for the concert. What followed was a dreamy mix of faultless three part harmony entwined in a blend of harp, fiddle and accordion. 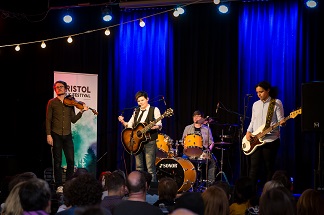 A short walk for a sojourn at the packed out singaround hosted by Jimmy Aldrdige and Sid Goldsmith at the Three Tuns found eager participants in full and enthusiastic voice, but onward. Hidden away behind Park Street is the Folk House, a wisteria draped oasis in the middle of the city that offered a side of tea and cake to compliment the great music programming. Under the fairy light festooned ceiling of the concert hall, Hannah James wowed the audience in the afternoon concert, drawing us in with charm and wit between songs. Her choice of accordions sang like an orchestra whilst simultaneously pulsing like a rhythm section. The material was varied and moved from vibrant dances to a poignant reflection on very real tragedy.

Grace Petrie had a similarly uplifting set supported by her band. The political commentary was forthright and honest and the band were the perfect vehicle to share some powerful messages of inclusivity and remind us why uniting to fight oppression is still so important in 2019. The ever present political narrative felt relevant and fitting under the folk umbrella and the concert left me with a genuine buzz.

St Georges, where the festival settled for the entirety of its Sunday programming, is an impressive arts venue. Huge reverberant spaces filled with light, and on this particular weekend, the sound of everything from Hurdy Gurdys to Pipes. The standard of performance across the whole Folk Festival was incredibly high, but St George’s hosted some of the most unmissable acts and engaging fringe events. 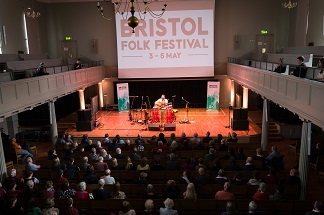 St Georges, where the festival settled for the entirety of its Sunday programming, is an impressive arts venue. Huge reverberant spaces filled with light, and on this particular weekend, the sound of everything from Hurdy Gurdys to Pipes. The standard of performance across the whole Folk Festival was incredibly high, but St George’s hosted some of the most unmissable acts and engaging fringe events, including Cara Dillon and Hannah James 'In Conversation' and a panel of 'Folk Blokes' hosted by fRoots editor Ian Anderson. Both Nick Hart and Thom Ashworth went on to play memorable sets in the main auditorium, peforming quite different but equally engaging interpretations of traditional folk songs.

Although the festival experience was shared among different spaces, it maintained a sense of coherence and community as the same faces appeared in the audiences through the weekend. Testament to the great atmosphere, by the end relative strangers were greeting each other like old acquaintances, having shared magical concerts and rowdy singarounds alike.