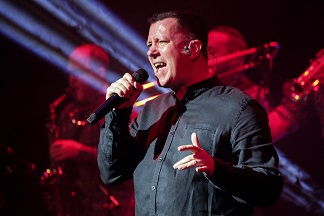 In The Air Tonight

I had no idea what to expect from this gig when I booked it. I had booked for a different show which had been cancelled and as I like Phil Collins and Genesis, I thought we would give this one a go. I was especially intrigued to see how the fairly complex sounds of Genesis would be recreated.

The relatively recently renovated Royal Hall provides a beautiful concert setting with its vaulted ceilings, chandeliers and an elevated stage rammed this time with equipment and guitars.

The evening started with a couple of very short drum solos to set the mood from two of the three separate percussion set ups. Chris Hayward, Phil Collins in disguise, is the lead impersonator (?) and I have to admit that after 5 minutes both my wife and I were convinced that it was Phil Collins even if he said he looks more like Joan than Phil.

Harrogate audiences can be somewhat reserved and aloof but the warmth of the performers and the quality of the music very quickly brought out some noisy appreciation from the crowd. Some even danced which, bearing in mind the average age of the residents of Harrogate, is no mean feat on its own and says a good deal about the music on offer. This was the first gig of the year for the band and any pre-show nerves will have been dissipated quickly by the reception they received.

The band consisting of eleven singers and musicians are of the highest quality and the sounds produced mimicked Genesis absolutely and the brass section made the Phil Collins solo song book come alive. The lead guitarist is most certainly as good if not better than Mike Rutherford.

The version of "In The Air Tonight" was not only stunning it was also quite moving. Two other songs, in my opinion, were simply superb. The beautifully haunting "Another Day in Paradise" and the thumping Genesis hit "I Can't Dance" were delivered with both panache and style as indeed were all the songs.

Musically, this is one of the best tribute acts that we have seen and one I would have watched again almost as soon as we left the theatre. Two and a quarter hours of real quality nostalgic music just flew by! A quite fabulous show that will stay in the memory for many years to come.